I am now pretty much done with my role as a Set Decorator. It was an unforgettable experience especially when you have a veteran by the name of John Hinkle come in and show you a mini blueprint of how things are done. Quick background of John Hinkle, he is a professional set painter. However, he has done so many more roles such as make-up artist, he has been a stand-by painter, and he even was a PA at one point. He has worked on films from L.A. Confidential to Princess Diaries and even Lethal Weapon with Mel Gibson. His portfolio is everyone’s dream because has worked on some very notable films. Mr. Hinkle came to our set several times to show us different tricks including texturing and how to age wood. It became a whole art masterclass and I had a great time. These are a couple of photos of some things we created with Mr. Hinkle. 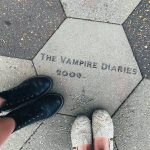