Like everyone else, I was very interested to see how Halloween would look this year. While my family and I took on the burden of staring at each other trying to figure out what to do, it feels like everyone else couldn’t help but take advantage of the perfect circumstances.

Did I say perfect? Now why would I say something like that about a Halloween occurring in the thick of a real life horror film called 2020?

Because it could have been. Should have been. It’s only once in a blue-moon that the night lands on a weekend, and it just so happened that this year, it did.

A full blue-moon on a perfectly weathered Saturday.

The proper response to this should be “Damn. What an unfortunate scenario to be in. Let’s get really creative and figure out something fun to do without endangering others and feeding the virus more souls!”

I’m sure history and covid case numbers will reveal how few people actually decided to respond properly, but in the mean time, back to my miserable night of everyone repeating “I don’t know, what do you want to do.”

Trying very hard to get scared this year, my 12 year old cousin got us all in a car and convinced us to drive to a very small and secluded cemetery a few miles from my house. Since the people in the car varied from hardcore horror fans to me and my 9 year old sister, we elected to blast music and make jokes on the way.  As the road narrowed and the houses got further apart, we approached a tree with a very small “Keep Out” sign and some headstones.

It was here, approaching the grass graves, that the gravel road ended.

We tried coming here one night several years ago, but I was too scared to open my eyes, let alone get off the floor of the car where I was balled up, so we left before even approaching the graveyard. This time, however, we went as far as the little road would take us, and I was in the front seat. My cousin rolled down her window and stood up to look into the dark.

Nothing else happened. We made it to the end and stopped.

The next day I watched Poltergeist and The Shining for the first time. I was by myself and I loved them. I understand that there are some terrifying films out there and these aren’t those, but I felt the anxiety I was meant to feel. This time there was no blasting music or making jokes so I could handle the suspense and anticipation. The chilling uncertainty played its part, and I had to contemplate.

What if I won’t be able to find the line I won’t cross? These are the films I was looking for (the ones that are worth a knotted stomach) and I’m sure there are plenty more like them. Does the road end here? Will I ever know how to classify what I can/can’t handle? What does “worth it” mean to me?

I’m afraid it’s time to get out of the car and start walking.

That’ll be me somedayA thought, film 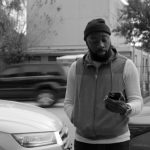